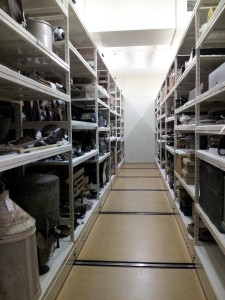 Earlier this year I went on the Behind the Scenes I Spy Tour at the Queensland Museum. It was a lot more interesting than I’d expected it to be. We started off walking through aisles of items stacked into shelves, wandering through the remains of the past. Bits and pieces of peoples lives, a small testament to their existence. I couldn’t help wondering about those who’d once owned the items. A doll’s carriage that some child would have pushed, creating their own make believe world. Tricycles, kids had once ridden. A large stuffed bear, with golden fur and amber eyes. It might have once been a treasured toy, taken to bed each night by the child who owned it. Now it spends the rest of its days on a shelf, a mute witness of untold stories. 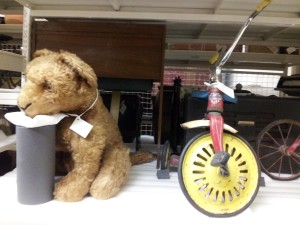 Metal fans, barbed wire supports from World War II, pedal cars, cane toad dioramas, carved figures, motor oil cans, a ship behind glass and a collection of native musical instruments. In every direction there was something to discover, something of importance from someone’s life.

Leaving behind the human world, we explored the animal one. We entered an area filled with strange smells and taxidermied animals. Amongst the animals were ones long extinct as well as some currently endangered. Because of this collection, the Mahogany Glider, which was thought to be extinct, was rediscovered. The man taking us on the tour through this area was great about answering the many questions my family and I asked. Answering them in a way that was easy to understand without talking down to us. We learned so much about animals and how some have developed to help them survive. And we even got to handle some items, including a large tooth. 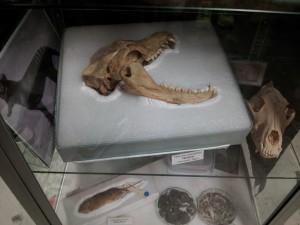 There were so many things, which the museum doesn’t have the space to display, that were worth seeing. The staff were all really great and able to answer the endless questions we asked. But there were questions that they would never be able to answer. Questions that only the owners of the items could have answered. I guess I’ll have to leave those to my imagination since many of the owners are now long gone, and in some cases, only their possessions proof they had once lived.