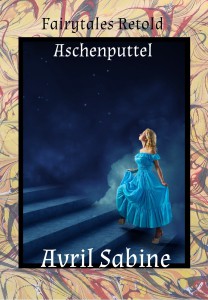 While I was reading through numerous fairytales, trying to decide which one I wanted to retell, I stumbled across Aschenputtel. I noticed so many similarities to Cinderella and after some research learned it was the original Cinderella story. It’s fascinating how stories change over time and it made me think of a game I played in primary school. Everyone would sit in a circle and one person would whisper a phrase to the person next to them. After the phrase had been whispered around the circle the last person would say what they had been told. It was never the same as what the first person had said and sometimes so different that it bore absolutely no resemblance to the original phrase at all.

In Aschenputtel you won’t find a fairy godmother, mice or pumpkin coaches. What you will find is a character who makes far more of her own decisions in going after her dreams. And that is someone I can relate to far more than the Cinderella who waits to be rescued.

Aschenputtel is now available on Amazon.