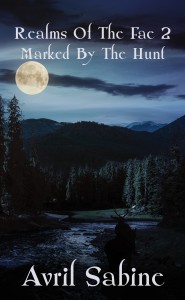 Sometimes a story turns out nothing like I expected. Marked By The Hunt came out of a dream. I saw the moon portal scene and several images of Masquerade. From that the story evolved. When I first started to write it, I thought I knew where it was going. I was of course wrong and my characters headed in their own directions, hounding me until the story was written. It took me less than a month to write the first draft. Long days and many sleep deprived nights as the words flowed and the story formed. So many times I went to take a break when the next scene would burst into my mind and I continued to type, thoughts of a break banished.

I’m often asked how I know what to write. I tell people I write the stories that keep me awake at night. This was definitely one of those stories. Realms Of The Fae 2: Marked By The Hunt is now available on Amazon.