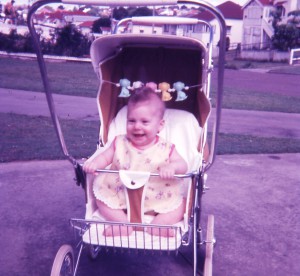 Avril- five and a half months old.

I’m often told by people I’m lucky to be such a good writer and they could never write like me as I must have been born with that talent. They couldn’t be more wrong. The only talent I was born with was the ability to see stories everywhere and an imagination that ran wild and came up with the craziest of ideas. One thing I was lucky about was that my family didn’t try and stifle my imagination. At times they even encouraged it.

My early attempts at writing were truly atrocious. I had the ideas, but no way to convey them well. I saw ideas everywhere, including in my dreams. They were in clouds moving and reforming in the sky, in the sound of music and nature, in art and sceneries, in throwaway comments people made and poetry, in the shadows of the night and unidentifiable sounds. Waking or sleeping I had stories running through my mind. Nothing has changed. My head is still constantly filled with stories.

Like every other author I had to learn how to write well. I’ve never met or heard of an author born with the ability to write perfect stories. There’s always some kind of learning curve involved. Since I knew at an extremely young age that I wanted to be an author, I’ve had a lot of years to practice. I’ve kept most of my writing, only a couple of stories being lost over the years, and you can see the gradual improvement of my work.

Writing can be a lot of hard work, but it’s something I love. Something I couldn’t image ever giving up. I will stop breathing first. It’s different for every author. To me, writing is like being in a movie at the side of my characters. Feeling everything with them, experiencing their moments. But I’m not them and their feelings are not mine. I’m like both a parent worried for their child and a nemesis determined not to let them reach their goals.

I’ve met people who’ve said they’ve given up writing because they were no good at it. That after a year or two they realised they were wasting their time. I always tell them they gave up too soon. An apprenticeship is often four years full time and even then you aren’t considered a master in your field. That takes many years more. If you want to write, don’t feel like it’s a talent you need to be born with. It’s a skill that can be learned if you persevere. And like any other skill, it takes different people different amounts of time to learn. If you really want to be a writer, don’t give up. Take the time you need to write the stories you want to share.