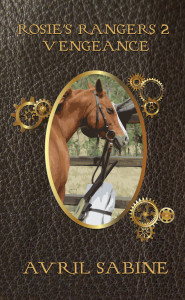 The moment I finished the first book in Rosie’s Rangers I wanted to start the second. My head was cluttered with ideas and snippets of scenes. It was extremely difficult to set it aside and go on with the work that needed to be done next and I scribbled approximately a thousand words of notes. Things like ‘Carlton-map-edge of Indahla’. Luckily I have a fairly good memory and those cryptic words brought to mind the original idea when I started to write it. It was the same with all the other equally cryptic notes.

As is fairly normal for me, I had no idea how the story would end even though I knew many of the scenes that would occur. I didn’t know all of the scenes. There were connecting scenes that had to be figured out and the many ideas needed to be organised into a more logical timeline. There were also situations I wasn’t sure how they were going to get out of, but that didn’t matter. I knew I’d figure it out eventually and discovering how things are going to work is half the fun. Which is probably why I wanted to write the second book the moment I finished the first one. I really wanted to find out how they’d get out of some of the situations they were about to be thrown into and what would happen at the end. The moment I finished my other work, which took far longer than expected, I immersed myself in Rosie’s world and set about to discover where her new adventure was going to take her.