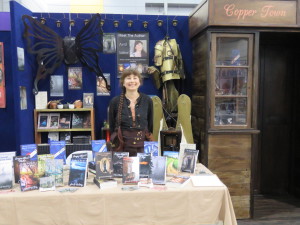 Earlier this month we attended Supanova. Like the previous times, it was such a lot of fun. I enjoyed catching up with people from previous events, meeting new people and talking to those who visited my stall.

This time we took a larger crew with us and had people dressed as various characters, from my steampunk series, Rosie’s Rangers. We had a shopkeeper, sky pirates, blood shaman, a human mech and I wore steampunk wings that moved. Our display had also grown and we had a shopfront similar to one from the 1830s. It was nice to have somewhere to display the steampunk critters that are based on the ones from Rosie’s Rangers.

As always I loved seeing the many costumes, people wore to the event, and couldn’t resist taking numerous photos. As did those with me. I put together a compilation of them, with a lot of help, and it can be found on Youtube.

I’m looking forward to the next Supanova and we’re already tossing around ideas for what we plan to do. It’ll be tough outdoing the shopfront, but we’re looking forward to the challenge. Now if only we could make a decision between the many crazy ideas we’ve been coming up with. Or possibly come up with one that is a little more sane.