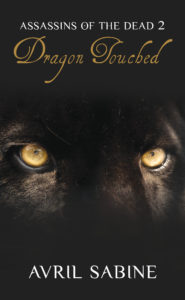 The night I finished the first draft in the Assassins Of The Dead series, or more accurately early morning due to how late I finished it, I dreamt the opening scene of the second book and had to begin writing. It was difficult, but I managed to set it aside as I had another manuscripts that needed to be finished. But the story kept drawing me back. I made notes as ideas came to me, sometimes making notes about two possible directions the story might go in, before returning to the manuscript I was currently working on. I also couldn’t resist writing a scene or two when they were too vivid to ignore. Actually, I wrote more than a couple of scenes, unable to resist finding out where the scenes would take Meikah.

In between finishing first drafts of other manuscripts and working on edits as they came in, the words in Dragon Touched slowly grew until by the time I was actually ready to spend time on writing it, the first draft was half written. The second half of the first draft took me approximately ten days as I’d already waited too long to find out what was going to happen. I needed to know where Meikah’s journey would lead her. I do of course have a similar problem now I’ve finished the second book and the third is well on its way.

Assassins Of The Dead 2: Dragon Touched is now available on Amazon.