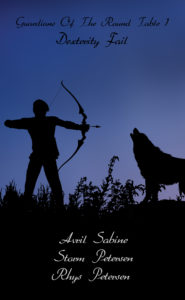 The idea for this series came to me quite a few years back. The eighteenth of February 2005 to be exact. I wrote a couple of scenes, but soon realised I needed to do a lot of worldbuilding first. The game mechanics needed to be in place before the story could be written and I knew that would take a lot of time which I didn’t have that year.

January of this year, I talked to Rhys about working on the story with me and we began worldbuilding. It wasn’t long before Storm joined us, adding his own ideas and the world and game mechanics quickly formed. Far more quickly than I had thought it would. Scenes followed and the first draft of the story was finished in February with numerous rounds of edits still ahead of us.

During the process we spent time researching, coming up with ideas for future stories and even weighing the clothes the main characters would have been wearing when they were transported to Inadon. After all, carry weight is a consideration in that world. The scales were brought out, along with numerous clothes and shoes, and we made notes of all the weights as we decided what the characters would wear.

Our worldbuilding document rapidly grew and it is now almost three hundred A4 pages long, with more details being added all the time as we look at the different areas of Inadon where the characters might travel. Guardians Of The Round Table 1: Dexterity Fail is now available for purchase and we hope you enjoy discovering the world of Inadon as much as we enjoyed creating it.