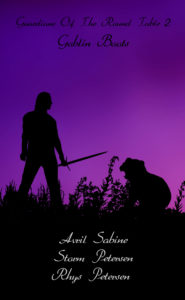 We are continuing to have a lot of fun working on the Guardians Of The Round Table series. At odd moments of the day and night and at various locations we find ourselves coming up with ideas for future stories, worldbuilding aspects and other characters. Including when we’re out shopping. There have been times when we receive strange looks from other people in shopping centres when one of us turns to the other to make comments like cursed king, using the blood of sacrificed animals to draw the face on poppets and how many followers do you think a demon would need to become a divine demon? I suppose we shouldn’t be surprised when other shoppers give us a wide berth and hurry away as fast as they can. When an idea occurs, sometimes it needs to be discussed.

Most of our planning though is done around the kitchen table with maps spread out in front of us, string, a ruler, a calculator, a handful of dice, pens and pencils, notepaper, a laptop and of course snack food. A planning session could take anywhere from an hour to several, but the one thing they all seem to have in common is plenty of laughter. One of us will come up with an idea then another will add to it. Sometimes the one who originally came up with the idea will extend on it, sometimes it will be the one who hasn’t yet added anything to it. Either way, we all share our ideas, make suggestions and talk about how the characters would react and what they would say in each situation we throw them into.

During our last planning session, who jokingly commented on how many books there might be in the series. Let’s just say, there are plenty more adventures to come. And we’re looking forward to writing them.

Guardians Of The Round Table 2: Goblin Boots is now available through various retailers.