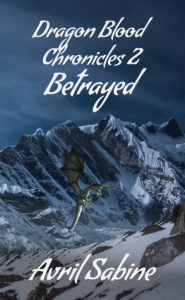 Betrayed is a story that came to me while writing the Dragon Blood Series. It came about due to a comment made by one of the characters related to an event that occurred in the past. I wanted to write more about the results of that event, but before I could focus on the present time, I needed to write about what had already happened. I wanted to understand the characters involved and the events that had occurred. It was also an interesting story to write and some of the characters will appear in future books set in the Dragon Blood world. I also enjoyed exploring more of the dragons’ past and how some of them would have been effected when the pathways between some of the worlds were closed.

Dragon Blood Chronicles 2: Betrayed is now available and can be read either before the Dragon Blood series or after book five. The past does have an impact on the future and Ronan wasn’t the only dragon unhappy with decisions made in the past.