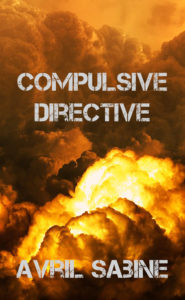 Once I’d written the start of Compulsive Directive, I had to set it aside for a bit to go on with other projects. When I returned to the story, eager to continue writing it, the words flowed and the bulk of it was written over two days. That first draft might have been quickly written, but coming up with a name was another problem altogether.

Sometime the name for a story comes with the idea. At other times, the name comes before the idea and I’m left wondering what kind of story would go with the title that came to mind. Other times I discover the title as I’m writing and on a few occasions, titles are suggested to me by early readers such as my editors. But this story was an effort to name. None of the titles I came up with seemed to fit. I was about to go with a name I wasn’t completely happy with, since the story had gone so long unnamed, when I finally figured out what to call it. It involved rewording a character’s comment, which still kept the same basic information after the edits, but I finally had a name for the story.

Compulsive Directive, a post apocalyptic sci-fi short story, is now available on Amazon and will soon be available at other retailers.