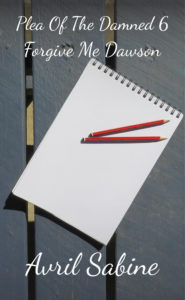 When I finished writing the fifth book of the Plea Of The Damned series, I knew how book six would end. I could see the scene play out in my mind and wrote most of it then, having no idea how the characters would reach that moment.

It wasn’t until I sat down to write the beginning of the story I began to figure out how the characters reached that final scene. I wrote scene after scene, wanting to reach that moment when the two pieces could be joined. There were a few minor changes that needed to be made to the final scene and of course some details I didn’t know since I hadn’t written the proceeding scenes, but the majority of it remained the same. From the conversations to the actions, there was so much that didn’t need to be touched and that my editors also left as it was.

The Plea Of The Damned series has now reached its end and Jack’s story is done or, depending on how you wish to look at it, is just beginning. Plea Of The Damned 6: Forgive Me Dawson can be found at Amazon and I hope you enjoy it as much as I enjoyed writing it.