This page contains spoilers for book 5 of Guardians Of The Round Table. 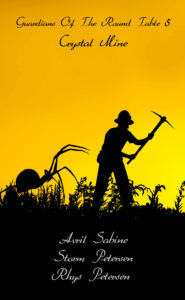 I gathered enough resources on the way to the farmhouse north of Velkden that I was about to take my apothecary to level forty-five. We stopped at a demonic shrine while some of our party travelled on to a farmhouse to set up before dark. Archers attacked us along with a rogue that threatened Brodie.

Reaching the farmhouse we found it had been turned into a refugee camp as the dark forces had attacked the village and took over the essence crystal mine. I was able to heal many of the survivors, but not all of them. We also learned that Kyla’s great-grandmother, who was cursed to be a harp, is missing and we think Deneg stole her.

Some of the refugees didn’t make it, but we learned of an orc mage with revive potions. He was one of the invaders who attacked Velkden. We went after him and managed to find eight revive potions to take back to the village. We also rescued some of the villagers held captive to mine the essence crystals. One of the rogues guarding them had a demonic spider companion and it is now roaming the mines, making it impossible for the villagers to enter.

Fang levelled up during the fights, which made Brodie happy, and we decided to return home for a few hours now Brodie’s knee is healed. Jorgen asked if he could go with us. Since he looks like he could be someone from Earth, we agreed to take him to our world.

While at home, Ryan was able to organise a place to rent while the rest of us were at school. It’s an old corner shop that will make a good house for us. While we were at home, Mum told us that we have to go to Dad’s place on the weekend. Hopefully it won’t make it impossible for us to return to Inadon during that time.

Arriving back in Velkden, we handed in some quests and agreed to go after the large demonic spider in the mine. From the experience points we gained, it was the highest level creature we’ve ever faced. We also gained spider eyes and fangs, which are alchemy ingredients. The eyes we traded for essence crystals. The people of Velkden gave us extra items for all we for them and Rodina said we’re welcome to stay with her if we’re ever in the area.

Early this morning I used the spell beacon to lure some of the people out of Cutthroat Harbour before we entered the village to look for captives. Rass was there and I used the poison mist potion on him and Zorlla as well as four others who were in the room with them. They both saw me before they died. Which probably isn’t good since Rass has so many revives and Zorlla probably has some too.

We were able to rescue Hisoki, Jorgen’s cousin Esben, Merry, Barle and also three villagers from Velkden. We had to burn one of the houses to escape and also raided an apothecary and secondhand shop before leaving. We now have a negative fifteen reputation in Cutthroat Harbour, which isn’t surprising. We did manage to take a wagon, a lot of potions and other gear, including a table and six chairs that Brodie wanted for some reason.

Hisoki left Emica with us and headed to the capital while everyone else, except for Ninette, Jorgen and Esben, went with the wagoner who plans to go home via Velkden and Wayholt. Even Kruth went with him, as the wagoner knows someone with a job that would suit him.

Jorgen gave each of us one of his clan beads so other travellers will know we’re to be trusted. We’re now on our way to South Point and then onto Delten where hopefully we’ll learn where Deneg is and be able to rescue Kyla’s great grandmother.