This page contains spoilers for book 4 of Guardians Of The Round Table. 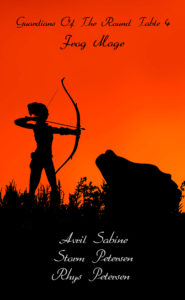 Callum tried to bring a coffee seedling with us by naming it Precious and adding it to our party. Bringing it back worked fine, it was removing it from the party that was a problem and I ended up having to use my flame spell on it. Afterwards we headed for the hellion encampment and ran into a frog mage who killed Callum. He now only has one revive left. Once we took out the frog mage, his frogs retreated.

At the hellion encampment, we rescued Emica and Jorgen. A kitsune and a crystalline wolf shapeshifter. Brodie was shot in the knee with an arrow. Writing about it still makes me smile. I doubt Brodie will ever find the humour in it, but it reminds me of one of the video games I like to play. Returning to Buckneth, we learned Osbert senior had thrown Ninette out of home and she travelled to Wayholt with us in the hope of levelling up enough to eventually make her own way.

In Wayholt we learned the apothecary would cost far too much for all of Brodie’s treatments and we’ve been working on levelling me up so I can put enough CAS points in the crafting ability apothecary. Then I can finish healing his knee and we can start heading south towards Cutthroat Harbour.

We’re staying at Sarisa’s home and she has insisted that Danae level up enough to gain another revive. The two of us have been taking turns gathering herbs and vegetables, with everyone’s help. We’ve both reached character level two, but it’s a tedious process. No wonder we haven’t done it before now. The one really good thing about staying at Sarisa’s place is that she has a bathroom. It isn’t fancy, but I’m hoping at some stage to soak in the tin tub by the fireplace.

We learned that the frog mage, who attacked us, lives near Wayholt. His frog, Cila, has been kidnapped and he attacked us to gain money for the ingredients he needs for an expensive potion the kidnappers want.

The day started far too early as we had to have Brodie at the apothecary when she opened at six. Afterwards, we focused on levelling up until we stopped for lunch then headed over to help the frog mage. He gave the kidnappers a fake potion so we could follow them back to their base. One of Cila’s kidnappers was Rass. He remembered us. I doubt he’ll ever forget us now, not after we killed him again. I also warned him that there’s a reward out for his death. I didn’t tell him it was the merfolk wanting him dead. I had to tell him something to stop him from thinking we had come to rescue Cila. He threatened go after the frog mage. It was the only thing I could come up with to change his mind. We couldn’t find the fake potion at their base. One of the kidnappers left before we attacked and we think she might have taken it. We need to find it before the dark forces can use it and learn it’s fake.

After we dealt with the dark forces who’d captured Cila, we returned her to the frog mage and collected Brodie, who we’d left with him since his knee isn’t healed. We returned to Wayholt and Callum went to visit Deneg, a vampire who is interested in being escorted to Velkden.

After dinner I finished levelling up to character level four and put CAS points into apothecary. I’ve now reached level thirty-five. Tomorrow I’ll be able to do rapid mend on Brodie’s knee.

I was able to do rapid mend on Brodie’s knee this morning, which will save us a lot of money if anyone should break a bone. I think Brodie is becoming extremely impatient about how long it’s taking for his knee to mend. At least it doesn’t take as long as it does in our world.

After breakfast we headed to the crypt to discover that the dead were restless due to grave robbers. We gained a lot of good drops from the creatures we fought and when we put everything back, including the bones of the dead in their coffins, they gifted us with some items. I received a necklace with a single pearl that doubles my healing. We still have to learn exactly what types of healing it doubles. For now, Smudge is playing with the necklace, much to Brodie’s disgust. Danni received a belt pouch that halves the weight of the contents, which she gave to me since I carry the group’s money.

Before we left, Sarisa gave Brodie some new recipes and is taking care of Not For Bacon. We’ll visit Wayholt again before Danni goes to Merrow so she can say goodbye to her mother and Brodie can collect his pig.

We are now on our way to Velkden, rather crowded since we’re giving Deneg a lift in his coffin and have Ninette, Emica, Jorgen, Welby, Roast, Kruth and the wagoner also with us. But it’s good to have the wagon so we can relax on the journey. Although we do plan to do some resource gathering so we can gain some experience points before we reach Velkden.

Legend Of The Ancestral King