This page contains spoilers for book 3 of Guardians Of The Round Table. 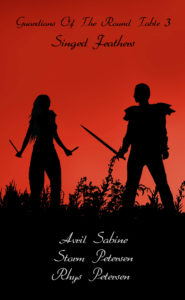 Returning to Inadon at six-thirty in the morning we helped Ninette become a warrior and named the donkey Bobbi before we travelled to Surith with the wagoner and Welby. We were attacked by bandits and a pirate and gained a map, which Brodie wanted to follow. We bought vambraces for Callum and a hunting bow for Ryan while we were in Surith and learned Danae will have a four week wait for a ship that can also carry livestock. She can’t leave Agusta behind. We escorted Welby to Wildebay and met Art, a shapeshifting rooster with a terrible habit of burning himself when he casts a fireball. He’s known locally as Roast. We discovered the map led to a bandit camp, Welby guiding us to it, and gained amongst other things a tent and a bedroll. The tent will come in handy if we go after fire drakes. Art offered us a bed for the night and we plan to escort him to Mer Point tomorrow so he can buy a fire resist amulet. He wants to travel with us when we go to Cutthroat Harbour, which is where we learned Welby’s brother is probably being held by the hellions that captured him. They have Art’s girlfriend, Merry, along with her cousin and another two villagers.

We escorted Art to Mer Point where we learned the village was having problems with smugglers who had kidnapped the Mer Point wagoner, stolen stock from the trader and taken the mage’s staff. While hunting down the smugglers, we rescued merfolk and killed a hellion with a lot of location specific revives. Rass. The merfolk we rescued would like him permanently dead. I’m not sure we’ll be able to manage that. Not if what the smuggler told us about the amount of revives he has is true. We made a deal with the wagoner and ended up making a good profit from the barrels and crates of gear we found in the caves. Callum also found a little bit of coffee and wants to attack dark force encampments and places in the hope he’ll find more. We discovered we could buy crafting ability books to learn more about the different abilities and unlock them. While escorting Art home to Wildebay, where we plan to stay the night, we called in to Surith to talk to the wagoner. We also gained our first character level. Finally. I chose warrior while the rest levelled up their current classes. Brodie wasn’t impressed that no one can use the healing spell.

Welby woke us this morning with a basket of sweet pastries from the Wildebay baker. Which certainly made Brodie happy. We escorted Welby and Art to Surith and somehow Brodie ended up buying a pig. And not for bacon either, as he put it. Which surprised all of us. He said he’s going to find a home for the pig, but I’m not sure how he’ll manage that. Or what he’s going to do with him in the meantime. We went to buy a horse and ended up doing a quest to rid the property of a nest of chameleon vipers. We also found twenty-four eggs which we were able to sell, along with the vipers, at a good profit to help outfit ourselves better. We also bought a crafting ability book and one on companion animals. Shopping done, we escorted the wagoner, Welby and Art to Buckneth where we’ll stay the night at the tavern, or part of the night, and travel home. We plan to stay in our world twenty-four hours. Which will mean only four hours will have passed on Inadon. I can’t wait to return and continue our adventures on this world.

The quest Turn A Blind Eye has expired and is no longer available. It may have been completed by another party or individual.

Understanding The Classes Of Inadon: Archer

Understanding The Classes Of Inadon: Mage

Understanding The Classes Of Inadon: Rogue

Understanding The Classes Of Inadon: Warrior