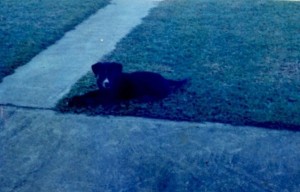 There is something special about your first dog, no matter how many other dogs have been a part of your life. Before my first dog, there was my father’s blue heeler who played hide and seek with us and always helped whoever was ‘it’. There was my mother’s dachshund that stopped me from escaping onto a busy road when I was two, and other dogs owned by family members and friends. But none of them could compare to owning my first dog. I got him just before my eighteenth birthday. I went to see some puppies who were a little too young to leave their mother, but she was losing her milk. One of them tumbled over to me, playing with my hand and looking up at me with eyes that begged for attention. His mother was a Dalmatian, his father a black Lab. He had a short black coat with a dash of white under his throat, down his face and at the tip of his tail. The other pups were disinterested, larger and more well fed then the one who was curious about the person sitting down in front of him.

I asked a million questions about him, wanting to know what he was like. He might have been the runt of the litter, but he was the curious one and had a lot of spirit. He now had a name, Spirit, and I had my first dog.

On his first night I made a warm nest for him, including a ticking clock. But he wasn’t to be fooled. He wanted living company. That first night I sat with him in the garage doorway, half dozing as he curled up on my lap. I wasn’t allowed to bring him inside my grandmother’s house, where I stayed part of the week because it was close to work. He came to expect that and each night he’d whine until I dozed in the garage doorway with him on my lap until morning arrived. Then he’d happily play in the backyard while I got some sleep. 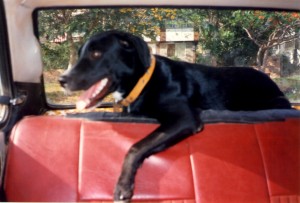 He wasn’t about to be left behind.

One day when I went into the backyard to play with him, he greeted me with a bunch of flowers. It would have been the sweetest gesture ever, if he hadn’t dug up my grandmother’s gerberas to be able to give them to me. And the first time he barked, he scared the hell out of himself, hiding behind me as he looked for the dog who’d made such a deep sound.

The sleepless nights and dug up garden beds didn’t continue. Before he was a year old, I had a different job and moved into my own place. Each night Spirit would pace around my house, guarding me from the strange and noisy neighbourhood we now lived in. And it was a good thing that he did because one night a man knocked on my door. He demanded that I let him come inside so he could stay the night because he’d known the people who’d lived there before. He was drunk enough that his request made perfect sense to him. Then Spirit was there, growling and the man was apologising and quickly leaving.

Our roles had changed. He was no longer a little puppy, runt of the litter, who needed to be cuddled all night and saved from the sound of his own bark. He was all grown up, the protector of his family and he’d just proven himself capable of that task. 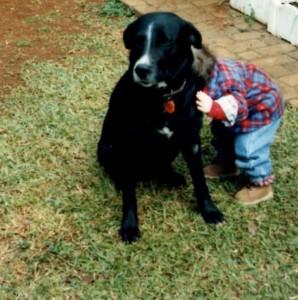 Spirit and my daughter.