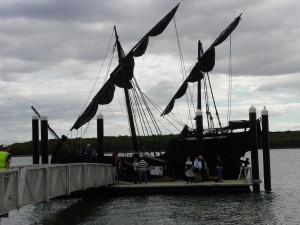 “Do you want to be a pirate?” Neither of my boys were in the least bit surprised by my question.

The youngest nodded. “Sure.”

My oldest asked, “Where are we going?”

“To see a replica of a fifteenth century caravel.”

“Can we go on it?” my youngest asked.

That one word convinced them. Next came figuring out the important details such as who was taking photos and who would use the camcorder, since this was also a research trip for me. Who says research can’t be fun? 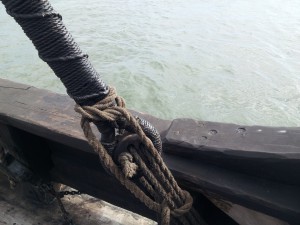 The ship, ‘Notorious’, was launched from Port Fairy, Victoria, Australia in 2011 and took ten years to build. If you want to learn more about Graeme and Felicite Wylie’s ship check out Wikipedia. You can also find ‘Notorious’ on Facebook. 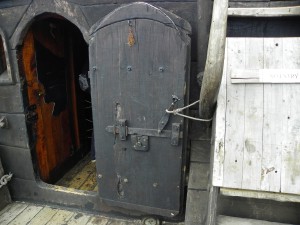 We caught our first glimpse of the ship while walking down a dirt path. We came around a stand of trees and saw a timber ship at the end of the dock. She looked like something misplaced in time. An old fashioned ship tied up to a modern dock, looking very majestic for all that she seemed out of place. 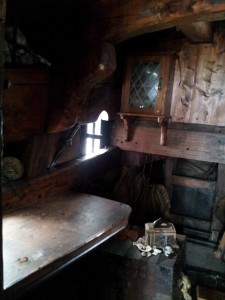 Graeme welcomed everyone aboard, answering the many questions people had. Regaling us with fascinating stories about building the ‘Notorious’ and sailing her. Once on board, with the gentle sway of the deck beneath my feet, the breeze against my face and the tang of salt in the air, I couldn’t help noticing how solid everything looked. We were surrounded by polished timber and masts towered over us with furled sails. The reclaimed wood, the ship had been built from, added to the charm and feeling of authenticity. 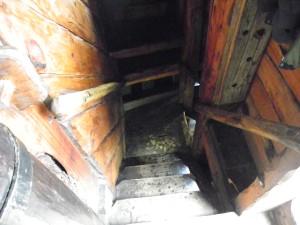 We took the narrow steps leading below deck and found ourselves in an area with several large trunks. Obviously somewhere for pirates to keep their treasure. It was amazing being below deck and unable to see the modern world I could easily imagine we were in some long gone era. Imagine that we were taking on supplies before setting off to explore the seas on some great adventure. About to face sea monsters, fight pirates, capture great treasures and return home laden with the bounty of our voyage. 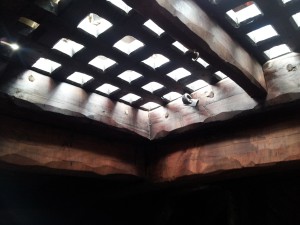 If you ever have the chance to visit ‘Notorious’, or any other replica sailing ship, I highly recommend going. We loved every moment of it and were disappointed we couldn’t become stowaways. 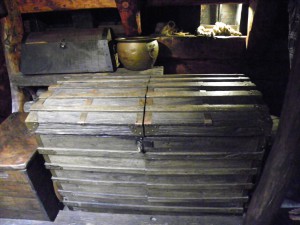