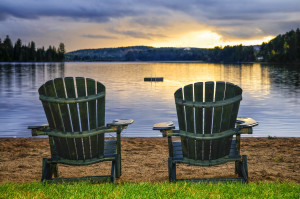 If it’s one thing I don’t lack, it’s story ideas. I see them everywhere. Often looking at a scene or artwork will give me a snippet of an idea. Sometimes those ideas become stories, at other times they’re added to my large file of ideas in the hope that one day I’ll find the time to write them. The following is the snippet of a story that came to me when I saw this photograph.

He could see them, only ten metres from him now. There on the beach where they’d always been, side by side. Close enough that a person could reach out and take the hand of the one in the chair beside them, yet far enough apart that the little fold up table could be set between them with afternoon tea placed upon it. They sat overlooking the lake so that when the grandkids came to visit, they could be supervised and yet when it was only the two of them there was a relaxing view to enjoy.

Seven and a half metres away now. Closer than yesterday. He could almost see her sitting in her chair. The one on the right. Always the one on the right. Even in bed her side was on the right. Seven metres away. The sun might have been setting, but it was more than bright enough to see the chair was empty. Even when his vision blurred it was clear to see no one was there. He ran the back of his hand across his eyes. He remained still. Seven metres. Maybe tomorrow he’d manage to get close enough to touch the timber of the backrest. The kids didn’t know what they were talking about. It wasn’t just a chair. It was where she’d spent so many hours, sometimes even in the rain, telling him to join her.

His shoulders slumped at the thought of never hearing that request again. Never hearing her voice. He turned away, unable to look at them a moment longer. Maybe he’d try again tomorrow. It wasn’t like it had been that long. Barely a year. He trudged back to the house, the building as empty as the chair.

2 thoughts on “The Two Chairs”