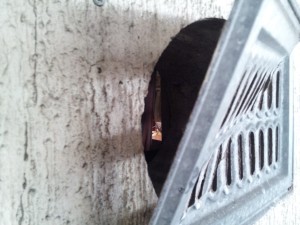 I saw this grate some time ago and wouldn’t even know if it was still damaged. Now I’m sure most people would look and think vandals, thieves or something equally ordinary. While one part of my brain, way at the back in an almost unnoticed place thought that, the rest of my brain was going along on different tracks. Such as wondering what clawed its way out of there. A closer inspection showed documents on the other side of the hole and of course demonic texts instantly came to mind.

Maybe it was a vandal, out for a bit of fun and while trying to lever the grate open they cut themselves. A droplet of blood fell inside when they put their hand in the opening. Bored, they turned away, only to freeze at the sound of sizzling. Peering into the gap they saw smoke rising from an ancient tome. The smoke began to form a shape and a demon became solid, asking how he could repay the vandal for setting him free. What a pity no one had ever warned the vandal that demons tend to twist requests so that what you think you’re asking for is never what you end up receiving.