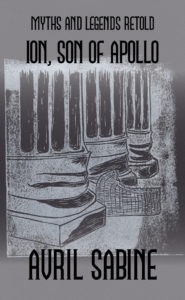 When researching the details of the myth about Ion, I found several variations of the story and chose to retell the one I was most drawn to. The original tale was attributed to the ancient Greek Euripides who wrote numerous plays. He often shocked the males in his audiences for the ‘heresies’ some of his female characters spoke. While retelling the myth I found myself researching more about many of the places and characters mentioned in the story, the Delphic temple and in particular the oracle that people came to consult with their many questions about the future. I lost hours immersing myself in ancient Greece, fascinated by the times, the culture and the people.

The first story in my Myths and Legends Retold series of short stories, Ion, Son Of Apollo, is now available on Amazon.