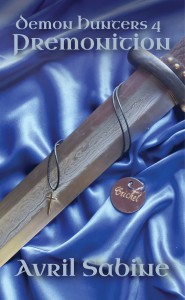 The idea for Demon Hunters 4: Premonition was a dream of a dream. Now that isn’t quite as odd as it sounds, or at least it isn’t to me. I dreamt of a girl having a dream, one of the Hunters. A dream she couldn’t escape and had relived so many times she could see it while awake. A dream of an event she’d never seen and hadn’t been able to prevent. One that haunted her.

I had no idea where the story would take me, or what would happen to Emily Hunter. So I did what I always do when fascinated by an idea and want to find out where it’s going. I wrote it.

Demon Hunters 4: Premonition kept me awake late at night as I was drawn into the story. Throughout the book there is a time, during the early hours of the morning, which is significant. Just before three, the hour of demons. When I finished the first draft of the story it was eerie to check the time and see it was exactly three in the morning. All I could think was, luckily it wasn’t two forty-five a.m. That would have been far stranger than finishing a book about demons and demon hunters at the hour when demons are considered to be strongest.