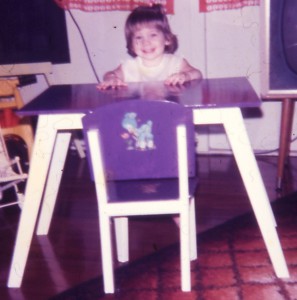 I can write anywhere. In the car, on the bed, under a tree, at the beach, on the treadmill. It’s possible, but it doesn’t mean it’s preferable. There’s nothing better than being in your own writing space, wherever that might be. To me it’s my desk.

My first desk was purple and I remember running my hands over it and feeling how glossy and smooth it was. I didn’t know what it was for, only that I wanted to do something at it. Mum tells the story a little differently. It was a purple table my grandparents had given my brother and me for Christmas when I was two-and-half-years-old. But seriously, it was all mine. He just didn’t know it. Apparently I spent hours sitting at my table and Mum gave me jigsaw puzzles to do and I’d quickly put them together then clear them away so I could go back to figuring out exactly what a desk was used for.

When I was ten, I lived with my Dad for a while and he had a desk. Well, he did until I moved in and took it over. I guess he must have thought I made better use of the desk than he did because when I moved into my own place at eighteen he gave it to me. I had a mattress, a small fridge and a desk, what more did I need? A bookcase would have been good, but I had the books and they were more important than any bookcase. I still have that desk, even though I outgrew it since I tend to take up way more space these days. One of my sons uses it now.

Currently I’m using a desk that was once my stepfather’s. A big desk with lockable metal drawers, well they were lockable until the key disappeared. And I’ve kind of outgrown it too, but I’ve solved that problem by having a table near my desk to create an L shaped work area. Okay, so it’s kind of solved. I tend to take up a lot of space, particularly when I’m starting a new story.

I sometimes say I should get a new desk, but it’s a bit like getting rid of a favourite jacket. And no, just because it’s older than me I’m not going to ditch my favourite jacket either. I bet I’m not the only one who hangs onto favourites when family and friends think it’s time to get rid of them. One day I’m sure I’ll find another desk that works better, but until then I’m sticking with this one.