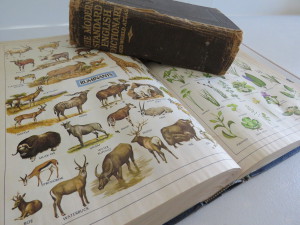 My love of books includes so many different types, including reference books such as dictionaries. Over the years I’ve added to my collection of dictionaries, unable to resist some of the beautiful editions I’ve found. I’m often asked if I really need that many dictionaries. What can I say? Obviously. I own them, don’t I?

My oldest dictionary doesn’t have a publishing date, but the pages are yellowed and there is a photo of the King and Queen, along with the royal princesses, taken at the time of the Coronation. It was my grandfather’s book and was given to me many years ago. It’s The Modern Standard English Dictionary And World Atlas. In the back of the dictionary is a section titled Austral English. This section contains Australian slang words and colloquial expressions of the time. I’ve found it a useful reference when I’ve wanted to find out more about that era. There’s also a section on prominent Australians, Fauna, trees, how to address persons of rank, countries of the world and an atlas. When trying to narrow the date down as to when it was published I looked through some of the list of prominent Australians and couldn’t find a date after 1939. When checking the dates of some of the people listed who had no date of death, I came across Clement Hill who died in 1945. So the dictionary was likely to have been published some time between those two dates.

Another dictionary I have is Webster’s New World Dictionary. It may not be the oldest dictionary I own, but it’s the one I’ve used for the longest. My father bought it when I was ten years old and it has coloured pages with lists of different things such as trees, rocks, shells and animals. I used to pour over those images for hours. They were great for seeing what different things looked like so I could describe them in my early stories. Things I’d never seen personally, but because of that dictionary I knew what they were called and what they looked like. To me that dictionary was almost magical. It could help me imagine all kinds of things and places and fuelled so many daydreams and stories. Decades ago my father asked me if I wanted it, having remembered how many hours I’d spent looking through it.

I still have the school dictionary we were required to have in late primary school. The Australian Pocket Oxford Dictionary was a handy tool I used on an almost daily basis. More for my writing than for schoolwork. I also read that dictionary from start to finish in a bid to learn more words I could use to create my stories.

I also have dictionaries I found in secondhand shops that looked interesting, ones I inherited and beautiful glossy ones that I couldn’t resist buying when wandering around bookshops.

You can never have too many dictionaries. Obviously. Only take a look on my shelves and you’ll see that for yourself. One is never enough.