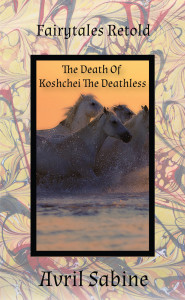 This time when it came to choosing a fairytale to retell I didn’t spend the usual amount of time reading through fairytales deciding which one I wanted to retell next. But that’s only because my daughter heard about an interesting tale she wanted me to write so she could read it. I told her I’d have a look and set about finding several different versions of The Death of Koshchei The Deathless to read. She was correct. It was a fascinating tale and one I wanted to write.

There were several versions and I mainly focused on one of them, using some of the details of the other versions to answer parts of the story that needed more depth or explanation. I enjoyed writing about Prince Ivan and Princess Marya Morevna. It isn’t often you come across fairytales that contain a warrior princess. Or even a strong female character. So it was nice to find a fairytale that had a female character who was both a strong character and a warrior.

Fairytales Retold: The Death Of Koshchei The Deathless is now available on Amazon.