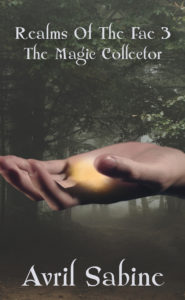 Realms Of The Fae 3: The Magic Collector is one of the story ideas that came to me in a dream. Sometimes it’s only a single scene that comes to me. At other times it’s nearly the entire story. This time it was numerous fragments of scenes. Enough to have me intrigued and wanting to know more of what was going on, how all the scenes fit together and what happened in between each of those scenes. Some fragments didn’t make it into the final story, others changed slightly, but many remained exactly as I’d initially dreamt them. Ones such as the existence of the cursed exit, the cat and the waterhole are exactly as I dreamt them. Every little detail identical to those of my dream.

There were times when I had no idea how the many scenes would connect together to make an entire story. Or the order they all belonged in, but I had a lot of fun figuring it out and answering the many questions I typically have when writing.

Realms Of The Fae 3: The Magic Collector is now available on Amazon.