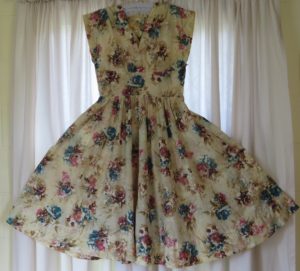 I’ve always been interested in history, even as a child. My nana had a tendency to keep everything so her place was like a treasure trove of things to be discovered. Nana used to be a seamstress so there were old cottons, a treadle sewing machine, heaps of material and numerous buttons. Everything had a story. I spent hours asking her to tell me the story behind all the things I discovered. 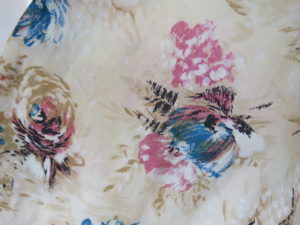 One of the items was a dress I loved to wear. It was far too big, dragged on the ground and I used a scarf around the waist to make it look less like a decorative sack draped over me. The stories about it fascinated me. They involved World War II, rations, a lack of material and things remaining scarce even when the war had ended. Nana told me how there was an excess of parachute silk, left over from the war, and some of it had patterns printed onto it so it could be used for dress fabric. She was able to get hold of a piece of the material and make herself a dress. After years of rations and being unable to get much more than the basics, she had something completely frivolous and unnecessary. The war had ended and people were trying to reclaim their previous lives. 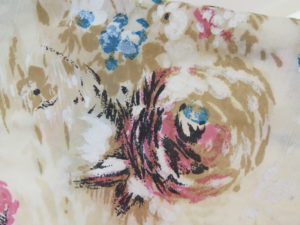 I still have the dress and occasionally wear it, thinking back over all the stories attached to it like threads holding it together. Memories of mine and ones that belonged to others. Of war, loss, scarcity and hope.