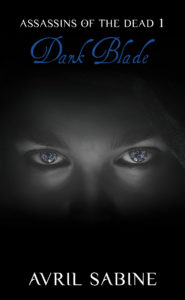 While choosing what I wanted to write next, I decided to work on something new. I wanted to come up with a new idea rather than pick one of the many ideas I’ve made notes of over the years.

I needed to decide what I wanted the book to be about. Setting was my first thought and I do enjoy fantasy, particularly a medieval style fantasy world. That was sorted so next I needed to figure out if it would be real world, completely made up or an alternate reality. The ideas began to flow. I wanted magic in a world I had created. There needed to be warriors, assassins, vampires, ghosts and shifters. Within minutes I came up with the idea for a series. Numerous possibilities, storylines and characters instantly formed in my mind.

I couldn’t wait to get started and began immediately. In fact, I enjoyed writing the first book of Assassins Of The Dead so much that I began the second book in the series after I’d barely written the first.

Assassins Of The Dead 1: Dark Blade is now available on Amazon with the second book of the series well on the way to being finished.