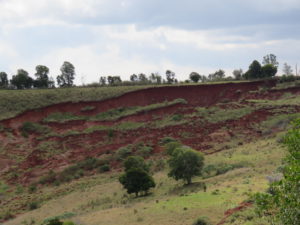 Often when I’m out, I can’t resist taking photos of things that inspire ideas. After registering the facts, my brain frequently takes a sharp turn into the realms of fantasy and whoever is with me ends up hearing yet one more story idea that I’d love to write.

The hollowed out ground, in the image above, reminded me of the holes a dog I once owned would dig to sleep in. Particularly in summer so he could create a nice cool sleeping place. This hollow was far larger than the holes my dog ever dug and a creature that size would be enormous. Not to mention easily noticed. And if no one had noticed him before, that meant he had to have been asleep for a very long time. Had he willingly gone to sleep or had someone put him to sleep in the hope he never woke. Had they put him to sleep when they learned he was impossible to kill?

Would he be bent on revenge against the one who sent him to sleep and who was likely long dead? Or would he be angry towards all he comes across. What if he came across someone who looked similar to the one who put him to sleep? Would that be enough of a resemblance to have him target them? And what had he been doing in the first place to have someone wanting him dead?

Maybe he wasn’t the evil one. He might have been some sort of protective creature and the one who tried to kill him was the evil one. They might also be alive, as immortal as the one they sent to sleep.

What would have woken the creature? An expiry date on the spell that sent him to sleep or some unsuspecting person, trying to escape the creature who now thought they were the reason he’d been trapped in sleep.

As always there are numerous possibilities and the story could go in so many different directions. Maybe one day I’ll get to write it and figure out exactly why the creature slept for such a long time and what happened to him next.