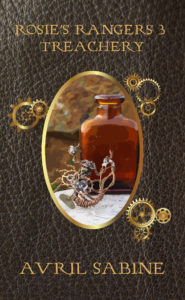 When I sat down to write the third book in my Rosie’s Rangers series I had a few vague ideas about where it was likely to go. Within minutes those ideas had been replaced with an image of Mila Bloodstriker, Asa’s cousin, turning up at Rosie’s farm.

The words began to flow and I struggled to keep up. Kidnappings, highwaymen, thieves, corrupt soldiers, illegal potions, blood shaman staves and plenty of adventure and danger came to mind. I often wrote late into the night and the early hours of the morning, missing out on sleep a few times because I needed to know what was going to happen next.

Some authors plot and plan their stories. I love to experience the story as I go, along for the ride with the characters, filling pages with words so I can follow the characters on their adventures. Some of those vague ideas I had at the start of ‘Treachery’ may go into a future Rosie’s Rangers novel, or they may not. But I’m looking forward to finding out exactly where Rosie is headed in future books and what her and her companions will do during their many coming adventures.