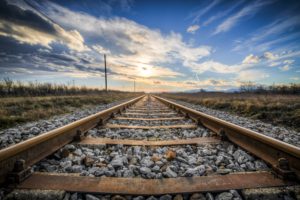 During primary school we took a long journey on a train. My mum, two younger siblings and myself. There were so many things about it I found fascinating. We were in a sleeper carriage and the bunk was like a different world. A place to not only curl up with a book, but to catch glimpses through the window of the scenery outside. There were stretches of open land, not a house in sight, towns filled with people, railway sidings that if you had blinked you might have missed them. I thought of ways to describe the places we travelled through, wondered about who might have lived there or what was in the area. I also wondered about where we were headed, but was mostly fascinated by where we currently were.

Of an evening, as I fell asleep, the sound of the train travelling across the track made a unique sound. It was mostly a rhythmic lullaby, reminding me I was going somewhere, even as I slept, my dreams filled with equally fascinating adventures.

There were times when the sleeper felt cramped, especially with my younger siblings cooped up inside the cabin too. The corridor outside the sleeper was also an interesting spot. Large windows to the passing world, strangers on their own journeys and two directions leading to other carriages. I would have loved to explore the entire train, but sadly that wasn’t possible. But there was more than enough to keep me interested in the sections where I was allowed and of course I had books with me. When you love to read there is always something to do.

When we arrived at our destination, there was yet more to see. The station was crowded. There were numerous people, a mixture of noises, bright lights and lots of colour. So much to see, so many things to feed my imagination and fuel more ideas for stories.

It’s memories like this that I draw on when writing. Using them to add a touch of realism to even my fantasy novels. The wonder of going to new places, discovering interesting things and meeting fascinating people. I still enjoy travelling. Going to out of the way places and often taking random directions because they look or sound interesting. Not only do I enjoy travelling myself, but I also love to hear about other people’s journeys too. They can be as fascinating as experiencing my own travels.