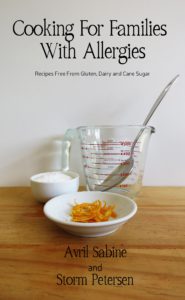 When my family had to go gluten free, due to one of us unable to have gluten in our diet, I didn’t think it would be that difficult. Between us we have quite a few allergies, including ones I’ve had my entire life, so I haven’t really known what it’s like to live without taking allergies into account. It’s normal for me.

My first action was to find a gluten free recipe book. At around fifteen years ago this wasn’t quite as simple as it is today. To say we were disappointed with what was available is an understatement. The first cake I made using the recipe book, I had purchased, could have doubled as a brick to build a house. I’ve been cooking since I was ten and hadn’t had such a cooking disaster since then, that even the dog wouldn’t eat what I’d made. Thinking I must have done something wrong, I carefully followed the recipe step by step, ending with the same results. I tried other recipes, all as terrible as the first. In the end, I threw out the book. Which was rather difficult for me to do, because it’s a book and I love books. All and any books. But there was no way I could give it away for someone else to go through the same trauma.

Making the decision to create my own gluten free recipes involved a lot of research. I focused on the science of cooking and food and the differences between gluten and gluten free foods. There was a lot to learn before I made my first attempts. I was so relieved they weren’t as bad as those I made from the recipe book I’d first bought. They weren’t perfect, were in fact a long way from perfect, but it was an improvement.

Over the years I worked on a variety of recipes, figuring out more as we needed them, one of my sons helping me. At times he came up with the idea for the next recipe, at other times it was me. Storm is also the one who is best at figuring out what a recipe needs to finish it off. The two of us have spent a lot of time cooking, sometimes making slight alterations to a recipe a dozen or more times before we were happy with it.

We plan to continue adding recipes to our book each year. None of the current recipes in the book will be changed and if we add a new variation, it will be listed as such. There’s nothing worse than having a recipe you’ve come to like changed on you. Each recipe has tips below it. Some will be about techniques related to making the recipe and others will be about personalising it to suit your tastes.

After many years of working on Cooking For Families With Allergies, it is finally available on Amazon and Google Play.