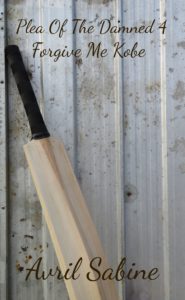 Forgive Me Kobe has been one of those manuscripts that I wrote during a time when I had a lot of edits come in for other manuscripts. I’d get one lot of edits done, thinking I had time to return to the story, when the next lot would come in. It became quite frustrating at times as I don’t plot so I only learn what will happen to characters when I reach each new scene. It felt like I was constantly being left hanging as to what would happen next. Approximately halfway into the story I had one day to work on it before the next lot of edits arrived. That day I wrote seven thousand words. Every time I thought of taking a break I couldn’t bring myself to have one. Otherwise it would be days before I found out what would happen to Kobe and Xavier.

By the end of that day I was far enough along I only had a couple of thousand words left to finish the story so I pretty much knew what would happen in the wrap up. I quite happily returned to editing other manuscripts, no longer feeling like I’d been left at a cliffhanger and finished the first draft off between other edits.

Hopefully you will be as interested to find out what happens in Forgive Me Kobe, as I was. It’s now available on Amazon and due to be in other online stores soon.