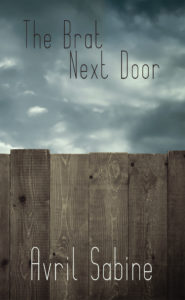 The Brat Next Door started out as an exercise at one of the writers’ groups I regularly attend. There were a variety of images to trigger ideas. We could either use a single image or a mixture of images. It was certainly my kind of exercise since I frequently gain ideas from a single image. I glanced through the pictures, my attention caught by one of them. An old felt hat, well worn, the khaki band torn, holding on by a thread. A story filled my mind, faster than it’d be possible to type. Images, scenes and words overlayed each other like seeing a life flash before you in the split second before death, crowding my mind with the entire story. Sometimes I don’t know where a story is going or what will happen. This time I did and it was an effort to write the words as quickly as I needed, wanting to finish while the scenes were so vivid in my mind. I spent long hours frantically typing, the images remaining with me until the end, taking up part of my attention when I had to set aside the writing to attend to other things.

The Brat Next Door is now available on Amazon. A story with a mystery, a bit of romance and a character who learns more than she expected.