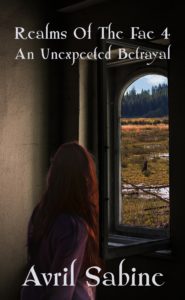 I was over halfway through writing An Unexpected Betrayal when I realised some of the characters weren’t who I thought they were, some of the relationships were different and things were more complicated than I initially believed them to be. But what could I expect? I was writing about the Fae. A complex race of people who are rarely simple and have more things going on than you first expect.

So I returned to the beginning, making all the major changes that I wouldn’t normally make until the editing phase. This time they needed to be done first. A few notes here and there weren’t going to be enough for me to take the story through to the end. Not without cementing all the threads and sorting out which plot lines needed to be carried through to the final scene and which ones were no longer needed. Once that was done, the story flowed quickly. Not that it had been difficult to write before that stage.

This is one of the downsides of writing without a plan, but I wouldn’t change a thing. Discovering the characters, learning what will happen and finding out what is going on is part of what makes me write so fast. The story draws me in and keeps me going as it unfolds before me. Curiosity keeps me writing for long hours at a time so that I often forget to take breaks as I lose myself in the world of my characters.

Realms Of The Fae 4: An Unexpected Betrayal is now available on Amazon.