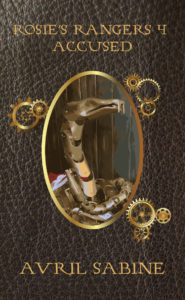 Last year, Clint was talking about a creation he was working on. He was using it to figure out a concept for another project. He ended the explanation with, “It’d also make a great snake.”

At the time I was doing some work on the fourth book for Rosie’s Rangers and there was a mech snake in the story. So I asked if he could make one. He wanted to know why I needed a mech snake.

“Because it’d be the perfect cover for Accused,” I said.

This was followed by a more in depth answer and a discussion of what the snake should look like. The answer ‘interesting’ wasn’t sufficient. Eventually, he stalked off saying he’d make it how he thought it should be made and I’d have to be happy with that. There were regular visits to his workshop while I watched the snake form and take shape. It was exactly how I imagined it should be. The perfect mech critter to be owned by a circus performer in Sartegius. And all those who saw it at Supernova, Brisbane loved it too.

Rosie’s Rangers 4: Accused is now available on Amazon, complete with the mech snake on the cover and mentions of it in the book. Now I wonder how Clint feels about creating a baby mech kraken.