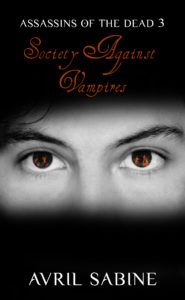 Like the second book, ideas continued to form for the third book in the series while I tried to work on other manuscripts. I regularly found myself writing scenes in between working on other manuscripts. Vivid scenes that wouldn’t let me wait until later to write them. Or to at least write bits of them before returning to what I was currently working on.

When it was time to return to Assassins Of The Dead, the words flowed as I added in connecting scenes and filled out the ones I’d partially written. As well as deciphered the handful of cryptic notes I’d made as ideas occurred to me. Luckily, it didn’t take more than a word or two before the ideas returned and I didn’t have to worry about fully deciphering the notes or struggle to figure out exactly what the randomly jotted words meant.

Reaching the end of the book, ideas continued to form for the next book in the series and I found myself once again jotting down notes for when I returned to writing the series. There is a lot more to come for Meikah and the Assassins Of The Dead.

Book three is now available on Amazon and I hope you enjoy it as much as I enjoyed writing it.