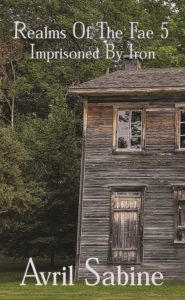 Sometimes it takes me years to get around to writing a story idea and I know there are some I’ll never have the chance to write as I have far too many ideas. This particular idea came to me in July 2006, but I have other ideas dating back to the eighties that I have still not found the time to write the story for them. Ideas I’d love to write. Instead, other ideas interrupt and other characters demand their stories be told and those older ideas are shelved, sometimes waiting decades before their characters become too insistent to ignore.

This is one of those stories whose characters patiently waited, eventually becoming impatient and demanding it was their turn. There were quite a few days where the characters kept me writing into the early hours of the morning, writing as many as six thousand words in a day. Imprisoned By Iron is finally available and I hope you enjoy reading Audrey’s story as much as I enjoyed writing it.