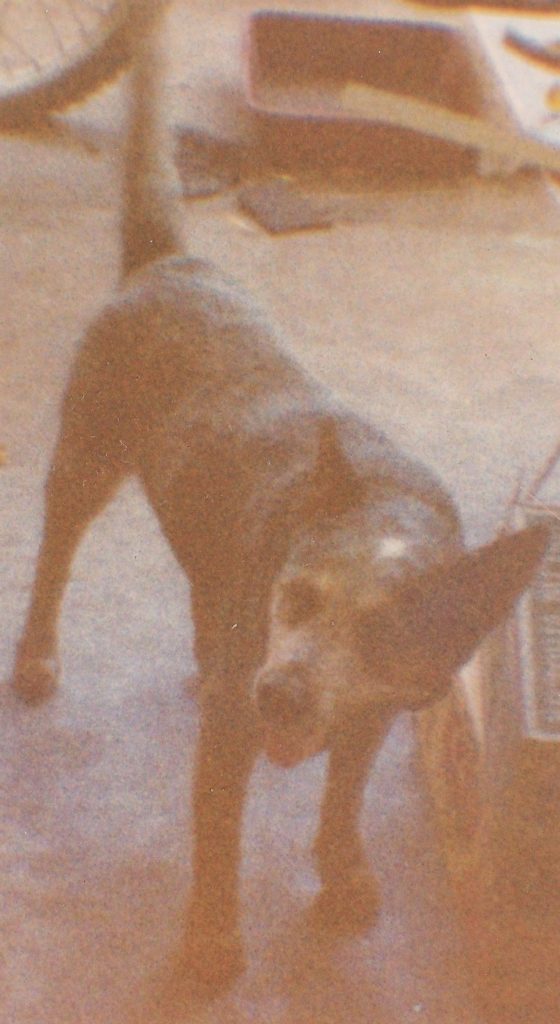 Growing up, my family had a variety of pets, mostly only one or two at a time. When I was in primary school, my dad had a blue cattle dog that he gave the highly original name of Bluey. My brother and I spent so much time playing with Bluey who had a special bark when he heard Dad’s vehicle in the distance. Which always gave us at least a good five minutes warning that Dad was nearly home. Dad was his favourite and he was always excited to see him.

On warm summer evenings, the year I was ten, my brother and I would play hide and seek outside. To make things a little more interesting, Bluey would help the one searching. He was good at hide and seek. You would tell him who to find and he would sniff around until he’d located them. So I not only had to outsmart my brother when choosing a hiding location, I had to outsmart Bluey too.

We lived in a high set house, a tall timber cupboard under the stairs where Dad kept his tools. There was a small gap between the landing of the stairs and the cupboard. Just enough of a gap for me to hide in. I would clamber up the side of the solid timber cupboard and squeeze into the small gap and stay perfectly still. Bluey would lead my brother straight to the location, pacing back and forth in front of the cupboard. Sometimes he’d go up the stairs and sit on the landing, waiting for me to come out of hiding. But until my brother found me, I wasn’t moving.

It was the best hiding spot. Each time my brother gave up, I’d wait until he’d left the area before I came out of hiding. There was no way I was going to give up the location. It helped that I was extremely skinny or I wouldn’t have fit in the space.

Some of my favourite childhood memories involved our pets. The four-legged and feathered members of our family. My childhood wouldn’t have been anywhere near as much fun without them. What are some of your favourite memories that involve a pet?