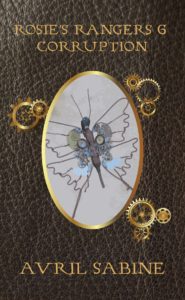 It is both exciting and bittersweet when I come to the end of a series. I’ve spent so many years writing about Rosie and her adventures, looking forward to discovering where they’d take her next. It’s strange to think this is the last book in Rosie’s Rangers and all the loose ends are tied up, or at least mention has been made of what she plans to do about them in the future. I always like to think of where characters might go after I leave them with their current ending. And Rosie certainly has an interesting future ahead of her.

There have been times while writing Rosie’s Rangers that the story has surprised me and went in directions I didn’t expect it would go in. Which although the directions were surprising, the fact that those surprises occurred weren’t. I find it happens with most of my longer series since there are so many words between the first book and the last that there are bound to be at least a few surprises along the way.

Looking back over the series, there are so many moments that stand out for me. So many things about it that will remain with me, like an old friend, as I go onto other series and say my farewells to Rosie’s Rangers. I have no idea if I’ll ever revisit any of the characters from the series and write their stories, of which many storylines have come to me, but for now, Rosie’s story is finished and I hope you enjoy the conclusion of Rosie’s Rangers.

Rosie’s Rangers 6: Corruption is now available if you want to learn how the series ends.