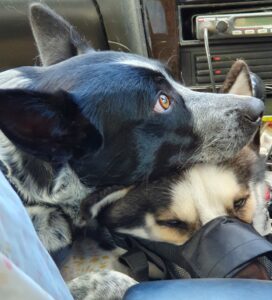 We recently went on a drive a few hours away and decided to take our dogs with us. Which meant finding space where they could be buckled in when we don’t have the largest of cars. Finding space for Jasmine isn’t that difficult as she isn’t an overly large dog, being a Border Collie cross Blue Heeler. Although she does better in the front seat with the window down a fraction, otherwise she gets carsick.

Ace takes up a lot more space as he’s a Siberian Husky. We found the floor to be more spacious for him and he rested his head on the car seat a few times and every time Jasmine decided he’d make a great pillow. Which he then thought it meant she wanted to play. A firm ‘settle down’ usually worked.

Like children, there were a few times they wouldn’t settle down. Even after regular breaks to stretch their legs. So they had a soft muzzle on for a few minutes, our version of time out, and they settled down again and we took it off.

At one stage, Ace found the air con vent and pressed his face up against it, which caused white hair to float around the car like some kind of crazy snow. Even though he was given a thorough brush before getting in the car, he still managed to fill the car with plenty of white hair.

Each time we stopped, they were fascinated by everything, wanting to explore and discover what was in the area. And when we arrived at our destination, they were so excited. Not because we were getting out of the car, but because they were at another dog’s house and were visiting their little friend they don’t see very often.

We haven’t taken Jasmine and Ace in the car together very often, except for short trips, since any longer and they just want to play together. But it’s nice now they’re older that they can go on longer journeys with us and see some of the place I know they’d love to visit.