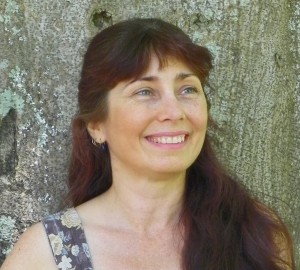 Where did you grow up?

I was born in Brisbane and raised in Queensland, Australia. And yes, I know that’s a state, not a town, but I’ve only ever lived in Queensland towns and there’s been quite a few of them.

Are you an only child?

I have a brother and sister, both younger.

What were your favourite books as a kid?

My first book I loved as a little kid was a book of fairy tales. I’d open the pages and they were filled with magic. Worlds and characters that sparked my imagination and made me think of stories of my own. When I was in primary school, I devoured Enid Blyton, Trixie Belden, Nancy Drew and numerous other books, some of which I still have sitting in one of my many bookcases. Once I reached high school I was reading David Eddings, Raymond Fiest, Anne McCaffery, JRR Tolkien, Shakespeare (for fun, not for school), Victor Kelleher, Margaret Mahy, Julian May, Terry Pratchett and countless other authors. And even the back of cereal boxes when I ran out of books, usually during Monday morning breakfast while I waited to get to school and scour the library for books I hadn’t read yet.

What is your earliest memory of writing stories?

Writing a story on the downstairs block wall of our two story home in charcoal and Mum making me clean it off. I was still in the “cave art” phase of my writing and not yet at school. But I swear it was a brilliant story and they were amazing stick figures and it was a great loss to the literary world when I had to scrub it off.

What was your first story you wrote on paper?

I don’t know if it is my first, but the one I still have a copy of I wrote in early primary school and it was about fairies.

What was the first novel you wrote?

I was twelve years old, the story was titled “Grandfather’s Farm” and it was 10,000 words. I didn’t start writing 80-100,000 word novels until I was fifteen and then I was averaging one a year. And yes, I do still have all of them except for one that disappeared and had me making numerous copies of all my stories.

Where do you get the ideas for your stories?

A lot of the time by asking questions. By looking at normal situations and thinking what if… and adding the unusual, the strange or the impossible to see what happens. I also dream stories so even in my sleep I’m working. Ideas come to me out of the blue, sometimes fully formed, sometimes as a character or a scene that has me asking questions. I’ve always asked a lot of questions and I drove those around me crazy with my constant ‘why’ when I was a kid.

When, where and how do you write?

Anywhere, anytime and with whatever is available. I usually write on my laptop, but there are scribbled notes scattered all over my desk and my phone has dozens of voice recordings of ideas that have come to me while I’m out and about. I write at any time of the day or night, often being dragged from sleep by an insistent story that has me back at my keyboard at 3 a.m. when I’ve only gotten to bed at 1 a.m.

What do you like to do other than write?

You mean there are things to do other than write? Well, read of course, but I also love computer games, travelling, the beach (particularly at night when the waves look like they’ve captured the moon), bushwalking, sailing, movies (not much TV because I get impatient to find out what’ll happen and hate waiting for the next episode), spending time with my family, art, craft, music (never hop in a car with me because I like to sing while I drive and I believe the sound of me singing is considered a form of torture), cooking desserts (because I love to eat them), research (and yes that is something I enjoy because it answers some of the millions of questions I have) and on the very rare occasion, gardening, but I have been known to kill a cactus by not giving it enough water. I mean, they’re desert plants, right?