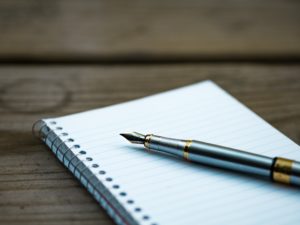 There seems to be a million ways in which people claim a story should be written. All I can explain is what works for me. It depends on how the idea arrives as to the exact method, but in general I follow the ‘seat of your pants’ style. If the story is a dream I’ve experienced I guess you could say I’ve done the planning in my sleep, but other than that, much of my planning is done as I’m writing. My characters are rather stubborn creatures and when I try and force them to stick with a plot, they rebel and forge off along different paths. Even some of the more meek characters can really dig their heels in when they don’t like the direction I try and make them take. And they’re usually right to rebel. It’s when I try and make them act out of ‘character’ that this happens.

I find listening to music helpful. Pop headphones on, turn up the volume and the world could be preparing for war and I wouldn’t know. Living in a busy and noisy household I had to find some way of tuning everything out. Although when you’re in the middle of a demon chasing your character, completely oblivious to the real world and someone puts their hand on your shoulder because you haven’t acknowledged a single word they’ve said, be prepared to jump and scream. Not to mention entertain the person who scared the hell out of you.

Once the story is finally written, I set it aside and go on with something else. Another first draft or edits on something else. You certainly don’t want to do any edits on a story the moment you’ve written it. You’re too close to see any of the problems. Once I’ve gained some distance, I return to the story and edit it first on computer and then, after another break, I print it out and edit it on paper. Only then do I send it to my editors for their first lot of edits.

This process of taking a break and editing continues several times until we’re all happy with the results. During this time the story is edited in several formats and read aloud in an effort to pick up all the mistakes.

And finally, after days and weeks, months and sometimes even years, the story is finished, ready to stumble out into the world and be read.