Necromancers are hated equally as much as they’re feared. They’re ostracised and hunted from towns and villages, finding refuge in uncivilised areas such as the Arcton Mountains. No one is born knowing they’re a necromancer. It isn’t until they’re a teenager or in their early twenties that they learn about their abilities. For some, it’s a skill they look forward to using.

Meikah is stunned to learn she’s a necromancer. The last thing she wants is to be driven from the town she grew up in or separated from her family. The only ones who might be able to help her are a secret organization called the Assassins Of The Dead. A group who hunt down necromancers and destroy the spirits and zombies they summon. The local group seems a mismatched lot and includes nobles, an assassin, a sorcerer, a shapeshifter and a vampire. Meikah has no idea if they can help, but there doesn’t seem to be anyone else she can turn to.

Want to hear how to pronounce the names of some of the characters from Assassins Of The Dead? Check the following video.

Book trailer for Assassins Of The Dead 1: Dark Blade.

Although the books in this series are self-contained, they are best read in order to avoid spoilers. 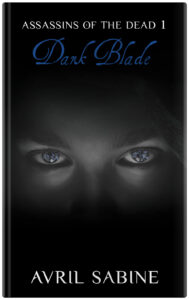 Assassins Of The Dead 1: Dark Blade

Meikah’s family are templars, as far from necromancers as it’s possible to be. When she learns that not only can she see the dead, but also wield magic, she fears what the future holds. She doesn’t want to become a necromancer, or a dark blade, but there seems to be few choices now available to her. It doesn’t help that people have begun to treat her like she’s an evil necromancer and rumours have started. Nor does she believe Kellan when he says she belongs with the Assassins Of The Dead. They seem to be a mismatched group that include nobles, an assassin, a sorcerer, a shapeshifter and a vampire. Not at all like templars. And if she was to join them, the rumours will never end and her family might actually disown her.

Dark Blade is available at the following retailers: 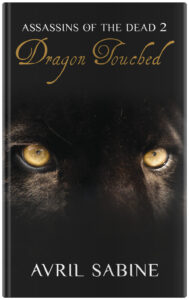 Assassins Of The Dead 2: Dragon Touched

Meikah, Kellan, Livia and Rafe travel to the Arcton Mountains when an assassin comes asking for help. A vampire holding is overrun by zombies. But it’s not the bandits and necromancers that most fear in the area. It’s the dragons and their nesting grounds. Cross a dragon and they never forget. And certainly never forgive. In an area known for its myths, legends and dangers you need to stay vigilant if you want to survive.

Dragon Touched is available at the following retailers: 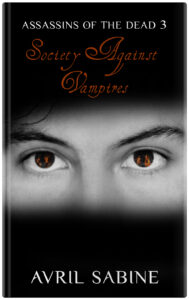 Assassins Of The Dead 3: Society Against Vampires

The Society Against Vampires are in Dreyton and vampires are going missing. Meikah is determined to do something about it before Rafe gets hurt. She’s been warned they have to work within the law, that some of the members are nobles and without proof they can’t pay for their crimes. Will they gain the proof needed before more innocent vampires go missing or is the society too well organised and impossible to catch?

Society Against Vampires is available at the following retailers: 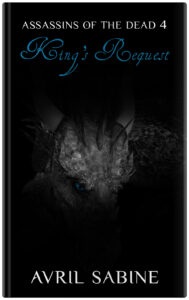 King’s Request is available at the following retailers:

Assassins Of The Dead 5: Duke’s Courier

Meikah had thought their tasks in Port Mayren were done. After being summoned to the headquarters of the Assassins Of The Dead, she soon found she was wrong. This time, things were personal. One of her family was in danger and she didn’t know if she had the skills to rescue them as well as prevent the deaths of over a hundred innocent people.

Duke’s Courier is available at the following retailers: